Senior Teams of the Future 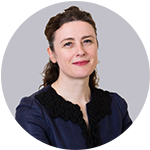 Winsborough’s Future Trends 2018 Conferences focused on the role of teams in business and how high performing teams will operate and develop in the fast-paced technological future.

It was a valuable opportunity to hear from some of the world’s foremost experts in leadership and teamwork, which included leadership specialist, Orla Leonard.


Orla is a Global Practice Leader at RHR International in London, and serves as leader for RHR’s Senior Team Effectiveness practice. RHR are in the leadership advisory space and are an organisation of psychologists and behavioural scientists that work at ‘the top of the house’ and the next level down, of businesses and really attend to the human behavioural side of strategy.

They work in the assessment and development and senior teams space – which Orla heads up globally. Her areas of expertise include executive coaching and senior team effectiveness and she has contributed to the Harvard Business Review online and Chief Executive magazine.

In this blog, we look at a few key out-takes of Orla’s presentation about Senior Teams at this year’s conference.

Orla believes that we’re seeing more of a call in the industry for senior team effectiveness - the main request that they have from clients being “we need help”. The client will often ask this with no real idea of what that help will look like, just that they need to be better.

Orla thinks that this is to do with the pace of change that we’re currently seeing in our world – the degree to which we expect our leaders and organisations to transition quickly to be able to deal with the multitude of changes from a range of different fronts. So, leaders and people in the HR space are realising that they need to rethink how they do things and are asking whether they need to be more ‘intentional’ in how they collaborate as a team. Sometimes this is done with teams that are ‘broken’ but most of the work is with teams that are ‘good’ but want to get to ‘great’.

Can top teams work together?

At the Future Trends Conferences, the topic of diversity and top team members having the ability to work together was often raised. Orla believes that this is dependant on the culture of the organisation. However, people who are at this top leadership level are great at being experts in leading a team, are less energised and experienced in being a part of a team. This can then create a silo mentality or have people that aren’t even aware of the need to leverage their colleagues. Teamwork is a part of their playbook, but learning how to be part of different teams is still a challenge.

Orla shared that in order to help these top players individually and collectively cohere and work co-operatively, they need to have a clearly defined purpose in the team. A team is the most important lever that a leader has to get done what they need to in business. When teams are able to coalesce around a clear purpose for the organisation, that’s where Orla sees better teamwork. Top team members are more likely to collaborate when they have ‘skin in the game’ allowing them to trade off their own interests and be invested in the goal, resulting in working as part of a team.

What do top high performing teams do more of?

The highest performing teams excel at both delivering short-term results and taking risks that pay off in the long term. And they manage tension by leaning in and managing conflicting priorities.

The ability of a team to look both inward and downward as well as outward and upward is an important success factor. The research showed that top high performing teams are able to scan externally for knowledge and use that to adapt, resulting in greater sales and revenue growth, and better development of new products. These top teams are able to use external pressures, realities and knowledge as a springboard for internal execution.

The success of any team relies on an ability to consistently innovate but Orla’s research suggests that the top performing teams successfully manage the tension between leading innovation and engaging the enterprise as a whole.